Every Blunt End Is Someone Else’s Sharp End 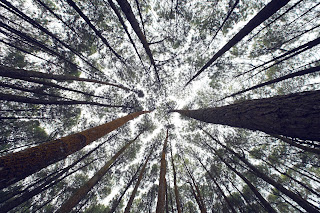 For a number of years an analogy has been used by many in the safety profession to illustrate the relationship between risk and power in organizations – the pointy stick. Sometimes it’s called a “spear” or “wedge”, but the point is always the same. At the pointy end of the stick are those closest to the risk, i.e., the workers. But the pointy end of the stick cannot control itself. It is controlled by the blunt end of the stick (imagine someone holding a spear and the analogy makes a lot of sense). At the blunt end of the stick are those with the least risk exposure, but the most power over the risk exposure, i.e., management, regulators, safety people, etc. The analogy is useful to point out that often people are influenced by factors beyond their control. Often people far removed from the risk greatly influence the risk. Therefore if there is a failure at the sharp end, if you only look at the sharp end you only get part of the story. 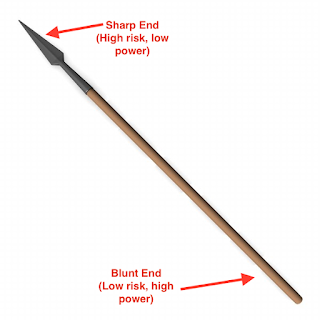 After an accident or some other type of failure our default reaction is to find someone to blame and punish. Often this is the worker at sharp end. That is, unless the failure is well-publicized. In the case of well-publicized failures (e.g., the Volkswagen emissions software scandal) those at the blunt end are the focus of our blame reactions. Just like the worker is an easy target within the organization, outside the organization those at the top of the organization are easy targets. They are often rich, have a lot of power and even tend to be a bit arrogant (or at least they seem that way to us). We marvel at their unscrupulous behavior, putting others at risk for their own personal gain. We see this same narrative in reactions to the NASA shuttle disasters, the BP oil spill and even the recent trouble safety leader Dupont has gone through. Led by the media, we look for someone to blame, and, surprisingly, we almost always find someone.

Take a step back and look at how familiar this story is to the story we see inside of organizations. A human does something that we say is the cause of an accident or other type of failure and we vilify that person (or persons), calling for accountability.

But here’s the thing – every blunt end is someone else’s sharp end. Every safety manager, every CEO, every regulator is influenced by someone else. Sure these people have significant power and responsibility, but that doesn’t mean that they aren’t influenced by other people or by their situation. If all we do is blame the people at the top and punish them, have we really fixed anything? Sure we may satisfy calls for justice, but does that really make us any safer?

We don’t think so. In fact, this kind of blame mindset is poisonous to safety. Why? Blame blinds us. Blame focuses us on the individual, not on the system. Why are so many of these CEOs so greedy? Is it because CEOs go through evil school before we allow them to run a corporation? Of course not!

Here’s the thing - when you see a pattern of behavior amongst a group of people, blaming any one individual may feel good (at least in the short term) but it is unlikely to lead to any significant positive changes. But when we search for blame we don’t see this. We only see what the person did. This blame-induced blindness stops us from improving. So, in the end, we end up sharing responsibility for bad outcomes, because we were more focused on fixing blame than fixing the system.

So what can we do? First, as Martin Luther King said, don’t ask who’s the blame, ask what’s to blame. When you see a negative outcome from a complex organization ask what conditions allowed such behavior to exist. Why did the behavior of the individuals make sense to them? These people didn’t intend to hurt others, so why did they do it? What’s leading to that behavior?