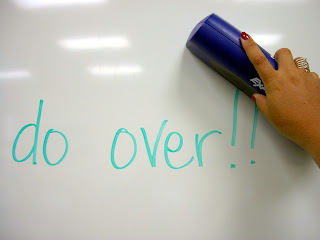 It’s one thing to talk about “human error”, it’s quite another to commit the error and to feel the effects of that error. Recently we had a situation where we had to deal with the fallout from a mistake one of our project managers made when scheduling services for a client. The project was an assessment where we had multiple assessors onsite conducting focus groups for employees. Each assessor was given a sheet that listed their activities, including location, contact person and time, for each day. Unfortunately one of the locations was put in incorrectly, resulting in two assessors going to the same focus group, and one set of client employees without a facilitator for their focus group. The supervisor for the employees became upset and cancelled the rest of the focus groups for that day for his employees. The focus groups would have to be rescheduled for another day and we essentially lost a whole day, where we had one assessor on site with nothing to do.

Now, obviously this event is not directly related to safety, as no one was injured, nor were they likely to be injured. However, the story is pretty similar to one you hear a lot following an accident or incident – someone screwed up and we have to pay the price for it. If only the project manager had paid more attention while setting up the schedule the failure would not have occurred. Therefore we can say that the cause of the accident was “human error”.

How do we deal with it? Well, the answer is obvious. If the project manager had only paid more attention we wouldn’t be in this mess, so we need to tell the project manager to pay more attention next time. Perhaps even some discipline is necessary to let them know the consequences of their mistake. We could dock their pay for the lost revenue from having an assessor do nothing all day. That would show them. If only we could find a way to get a picture of them in the act that we can use in training to shame them and others into doing the right thing, that might help them not make that same mistake.

Does any of the above sound familiar? It should, because it’s the same basic way that most organizations respond when a failure occurs and it can be traced back to some sort of mistake. The thing is that the above seems like it makes sense. However, what you see depends on what you choose to see. Or, as Erik Hollnagel says, what you look for is what you find, particularly after an accident. Many are content with seeing a failure event like the one above as another story of people not doing what they are supposed to do. So we need to fix the people (the project manager in this case) and the problem will go away. But if you choose to look at the event differently a different lesson and a different set of interventions present themselves.

Normally we have quality controls in place to check people’s work, but special circumstances made this challenging. First, it was a weekend, so most people were not available. Second, those that were normally available over the weekend, were not this particular weekend, as a result of their family dog passing away that Friday. Oh, and by the way, the project manager was constructing the schedule after helping bury the dog that afternoon. So he was doing complex work, while tired, potentially distracted, and without crosschecks to ensure accuracy.

Finally, the assessors who arrived at the same focus group could have realized that it is not normal to have two assessors in the same focus group. So that could have alerted them to the problem, which they could have then figured out that one them was supposed to be somewhere else. But the two assessors happened to be those with the least experience with the client and with the focus groups we do. In fact, one of the assessors was not even supposed to be there, as we had informed the client that we had a limited number of assessors available that morning, so we needed to limit the number of focus groups scheduled, which may have been lost in translation. But the customer is always right, so we pulled in an assessor who was unfamiliar with the project at the last minute to accommodate.

Here’s the thing – it is true that if only the project manager had not made the mistake then the failure would not have happened. But the fact that we focus on that piece of the story and ignore everything else should say something to us. Here’s some more “if only” statements that are equally true:


There are more “if only” statements we could identify. This isn’t just a long, convoluted excuse (we apologized profusely and took full responsibility to the client, making up the focus groups and making everyone happy). Rather, what we are trying to show is two-fold. First, as Drew Rae says, when you tell the story of an event, especially a failure event, like an accident, you are making choices. The choices you make are how you tell the story, what facts you share (and what you don’t share) as relevant, and who you highlight was important (and not important) to the story. All of this affects what you get out of the story. If all you do is tell the story of “human error” that involves a deficient person doing something stupid, then it makes sense that you would be led to the conclusion that you need to blame and fix that person. But if you choose to tell the whole story and context, if you choose to see the world through the eyes of the people involved (as much as it possible), a different picture emerges that leads to different conclusions.

The point of choosing to tell the whole story of the event is not to remove blame just for the sake of letting someone off the hook. Instead, it’s about really solving the problem. By understanding the story you can build in more defenses that actually improve your system. For example, if part of the issue is related to inexperienced assessors, telling the project manager to not make a mistake next time doesn’t make that situation better. It also doesn’t fix communication issues with the client in terms of scheduling needs.

So next time you are faced with a situation in your organization where someone made a mistake, remember that you have a choice. You can choose to focus on that one “if only” statement, or you can choose to see the larger picture and you just might actually make your system safer in the process.