When Safety Makes Us Unsafe

It’s sort of one of those provocative questions – is there such a thing as too much safety? In a sense, this is the wrong question (primarily because “safety” is such a subjective term). Basically though, is there a point at which if we add more safety interventions we not only get diminishing returns, but we also make things worse? 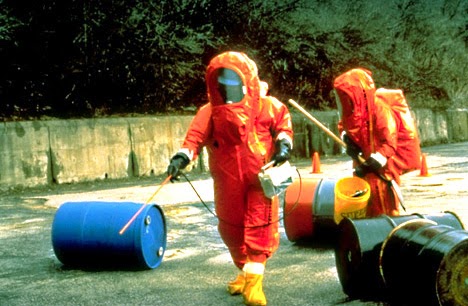 If we all thought hard enough I’m sure we can think of examples where safety interventions led to unintended consequences in the form of hazards. For example, anyone who’s worn a hard hat for a length of time has likely experienced the increase in the number of times you hit your head on things. Or those who wear extra chemical protective clothing who are more exposed to heat stress issues as a result. It’s not that these protections are or are not required necessarily. However, we can see that, in the wrong circumstances using these protections will not make you any safer, and you could argue it would make you less safe (e.g. if you were wearing a full chemical moon suit, such as in the picture above, while you’re reading this blog would that make you more or less safe?).

This concept can be applied to organizational interventions as well. Take example many well meaning organizations that, in an effort to motivate employees, use incentives for employees when they go a certain period with having an injury. The idea makes sense on the surface as a reasonable safety intervention. However, even the US Occupational Safety and Health Administration has come out against such programs because of the unintended consequence of motivating employees to not report injuries (and even motivating some safety professionals to play the “numbers game” and hide injuries).

These are easy and tangible examples of a broader concept that can even be more dangerous in other circumstances. We say more dangerous because when the downsides are not obvious that makes them harder to spot, which can also give us a false sense of security. We start to believe that our interventions are making us safe, when they may be doing nothing, or, worse, they may even be making things worse.

Take, for example, a strategy that a lot of companies adopt to show that their top management cares about safety – the idea that if you report an incident it automatically has to get reported up the corporate chain, everyone hears about it, and the CEO (or someone similar) gets involved. Sounds like a great way to show that the organization means business when it comes to safety, right? Recently we were working in an organization with exactly that policy. When asked how many incidents get reported the answer was “not many.” When we were with line employees we asked if there had been any incidents that should have been reported – yes. So an intervention designed to increase accountability and visibility for safety actually made the organization dumber, because they were missing opportunities to learn.

The problem is not that these people are not well-meaning. The problem is that we need to understand that whenever we implement a change, even a safety change, we are implementing it into a complex system that is already in operation. Systems don’t have “pause” buttons. Any change we make will interact with other parts of the system, in either predictable or unpredictable ways. That means there will almost always be unintended consequences when we implement a change and those unintended consequences could actually make us less safe.

There are plenty of other examples of this as well, some which are very complex:


Now this doesn’t mean that all of these interventions are bad and we should do nothing. The real problem, as we said above, is a failure to understand complex systems and how any intervention, even well meaning ones, can have unintended consequences. So, our job in the safety profession, if we really want to do good is to find ways to facilitate safety while minimizing or accounting for those consequences. Here’s some recommendations to get you started: