Talking to a Help Desk person one time about an issue we were having with our computers we found that the problem was, according to the IT person we were talking to, not a problem with the software or hardware, but rather we were not looking in the right place for the information we needed. So, basically, the problems we were having were our fault, not the computer’s. Jokingly, the IT person told us that this was a PICNIC situation – Problem In Chair, Not In Computer. 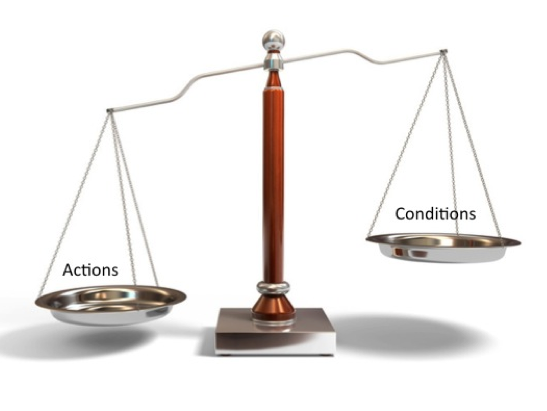 Now, we have to admit, that’s a pretty funny acronym. However, we think that PICNIC is also a pretty good example of how people thinking about human performance and, unfortunately, a common mistake people when they are dealing with the problem of “human error.” We often think of human performance in terms of an “either/or” – either the event was caused by an action or by the conditions the person was in (equipment, culture, etc.). In the case of PICNIC, either the problem is in the chair (the person) or in the computer (conditions).

This makes investigation and analysis easy, right? All we have to do is look at the incident, place all the human failures on one side and all the equipment failures on the other side and whichever side is the biggest is the one to blame and should be dealt with accordingly. This line of thinking is consistent with most models of safety management, most notably seen in Heinrich’s 88-10-2 theory, where 88% of all accidents
are caused by unsafe acts, 10% are caused by unsafe conditions, and 2% are just “acts of god” (unpreventable, according to Heinrich).

The implication looking at this data is that our systems (organizations, environments, factories, jobsites, whatever you want to call it) are basically safe. It’s all these unreliable, unsafe people who make things unsafe by not following rules and procedures. Therefore, we need interventions designed to change this disruptive, unsafe behavior. And you see this played out in the safety world with many of the interventions we tend to focus on, such as compliance, training, disciplinary procedures, reward and incentive structures, culture initiatives, hearts and minds initiatives, and behavior-based safety. As an indicator of the dominance of the focus on behavior in safety, look at the difference in group memberships in the LinkedIn groups for Safety in Design (624, at the time of this writing) and Behavior-Based Safety (12,634, at the time of this writing). Obviously this is not a scientific analysis, but it is an indicator of how representative the PICNIC idea is in the everyday practice of safety professionals.

But is the model that underlies PICNIC true? Well, to answer this question, let’s think about it. For it to be true that we can differentiate and analyze human acts separate from the conditions in which those actions take place. Basically, the human act must not be influenced by the condition and vice versa. If the action is influenced by the condition (or if the human influences their environment) then looking at them separately loses its’ value because you’re not looking at each in a natural way, as they exist in the environment in which the event occurred.

When we look at human performance closely this is exactly what we find – you cannot meaningfully separate the human’s behavior from the environment they are in. People naturally adapt their behavior to the environment they are in, adopting a strategy that they believe will help them achieve their goals. This includes making adjustments both to their behavior and adjustments to the conditions they are in. This is the essence of sociotechnical systems. The interactions between the people and their environment create behavior that you could not predict if you look at either separately. Further, these performance adjustments may also be separated from the event both in space and time, meaning that a traditional, linear investigation will not easily identify them.

The implication here is that traditional interventions may not be as effective as we’d like them to be. We need to change the way that we think about safety and human error. Rather than focusing on individual parts of a system, such as the people or the conditions, we need to understand how the people interact with the system and vice versa. Traditional methods of safety management are not well suited for this task because they tend to be based on the idea that we can easily predict the safest ways to do every job, but that’s not necessarily possible in complex systems (spoiler alert – almost any system that involves people is going to be a complex system). We need interventions not based on reductionist thinking, but rather based on understanding relationships, both relationships amongst people, but also relationships between people and their environment. We need interventions that help us understand not just failure, but normal work, where these performance adjustments are taking place. Most importantly, we need interventions that see workers as a solution to harness, rather than a problem to control, because it is these very same performance adjustments that are leading to success in our organizations most of the time.

This change in thinking may require the rethinking of some interventions (e.g. training), the retooling or even abandonment of others (e.g. behavior-based safety). But without change it is clear that safety management is quickly falling behind the curve in its' ability to provide effective interventions in an increasingly complex and dynamic world.