Robin Williams and Mental Health – Reflections from a Safety Professional

We’ve talked about this topic before (here) but given the recent passing of Robin Williams in an apparent suicide, one of our authors, Ron Gantt, wanted to share some personal reflections on the topic.

It is with particular sadness that I read about the apparent suicide of Robin Williams. Not only was he a beloved actor and comedian who will be sorely missed, but this also means we lost another person in the struggle against suicide and mental illness. As a safety professional I really believe in what I do – I have a hand in potentially saving lives. So when a life is lost needlessly, that alone breaks my heart.

Keep that last sentence in mind. We’ll come back to it later. 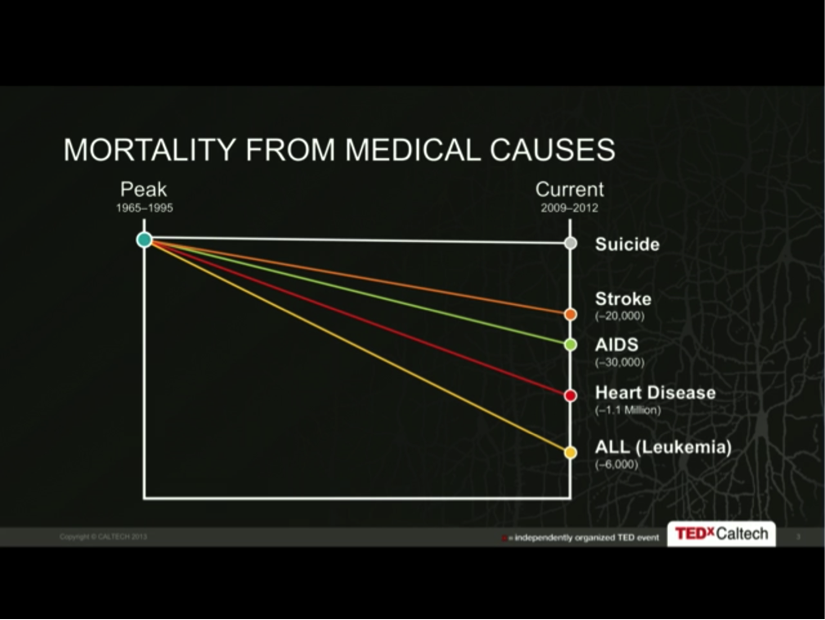 Unfortunately, suicide is all too common in our world. In the US more people kill themselves every day than die in car accidents. At work, more people are killing themselves than are dying from confined space accidents, or electrocutions, or fires and explosions. According to Thomas Insel in this TED talk while other causes of loss of life decrease, suicide rates are flat (see the graph to the side, taken from Insel’s talk) and are even rising according to some sources.

Despite all of this loss of life we as a society, and as a profession, continue to do little or nothing. Our misconceptions about mental health and suicide poison our ability to save lives. Just like we do with other aspects of safety, we put the focus back on the individual, telling them to buck up and do better. Just like with accidents, we play the blame game.

This isn’t a condemnation though, because I was like that once. But then mental illness and suicidality touched me. My wife was diagnosed with major, treatment-resistant, depression and borderline-personality disorder almost a decade ago, although we can see signs of her illness throughout her whole life. Although she hasn’t yet had an official suicide attempt, she has “self-harmed” on more than one occasion, and she has been incredibly close to attempting suicide many times. Many times I’ve had to work from home, miss work, distance ourselves from friends, etc., simply because we couldn’t leave her alone. When I do leave, we literally have to lock up all of her medications in a safe that I alone have the key to, and if I don’t hear from her all day there’s a real possibility that I’m going to come home and find that she’s succumbed to her illness.

If my wife had cancer or something like that, no one would question her strength and bravery for lasting as long as she has. But because people don’t understand mental illness and suicidality few people really understand how amazingly resilient she is. As an example, a news commentator was vilified recently for insinuating that Robin Williams was a coward for committing suicide (which he later apologized for). However, that wasn’t the only mistake the commentator made. Earlier he was questioning how someone could make the decision to end their own life. This shows a fundamental misunderstanding of suicidality.

Most suicides are not a well-thought out choice that the person made. It’s not like when my wife wants to kill herself, she does so after conducting a cost-benefit analysis. Something inside of her, some impulse, something separate from who she is, is telling her to end it all. She doesn’t want to die. She’s terrified of death, of leaving me, of leaving our family and friends, and our dogs (she’s a dog mom). But something separate from all of that love and hope and amazing creativity and intelligence is being tainted by a broken part of her. There’s a part of you and I that allows us to not even think about killing ourselves that isn’t working right in her. Telling her to just snap out it, to just go for a walk, use homeopathic medicines, think about happy times, or whatever well-meaning, but ignorant people tell suicidal people to do does not work.

As an analogy, imagine telling someone who has cancer to just smile more and that should make them better. Imagine telling them that the problem is that they just need to try harder to beat the cancer and that’s all. They don’t need medicine, treatment, etc. They just need good ol’ fashioned grit or to just wait it out. That doesn’t make sense, right? But for some reason, when the sickness that is also very deadly and is more deadly than many illnesses we are afraid of (e.g., in western countries, AIDS), that’s what we do. We call it mental illness, but we don’t treat it like any other illness. For every other illness it is normal to go to the doctor and get treatment and to take preventative measures to not get the illness. But for mental illness, for some reason, we put the responsibility back on the sick person.

So what can we do, as a society, but particularly as a safety profession? Go back to that sentence I told you to remember – when a life is lost needlessly, it breaks my heart. Many times when we say that we mean that it was needless for the person to make the choice to end it all. As with other things in our society, we think the problem is the person. That’s a huge mistake that will only result in more lives lost. Suicide is needless because if we build a system of suicide prevention in our society, in our organizations, in our families, in our lives, we can prevent this needless form of death. There are literally millions of people out there like my wife suffering, struggling every day to simply keep living. If we really want to save lives we need to identify the signs, avoid the myths, reach out to people who are suffering, and build in prevention and response systems, just like we would with any other “risk.”

There are lots of resources out there that you can use to get started, some in the blog post linked at the top of this post. Start today. You just might save a life.