Playing the Blame Game Higher Up the Corporate Ladder 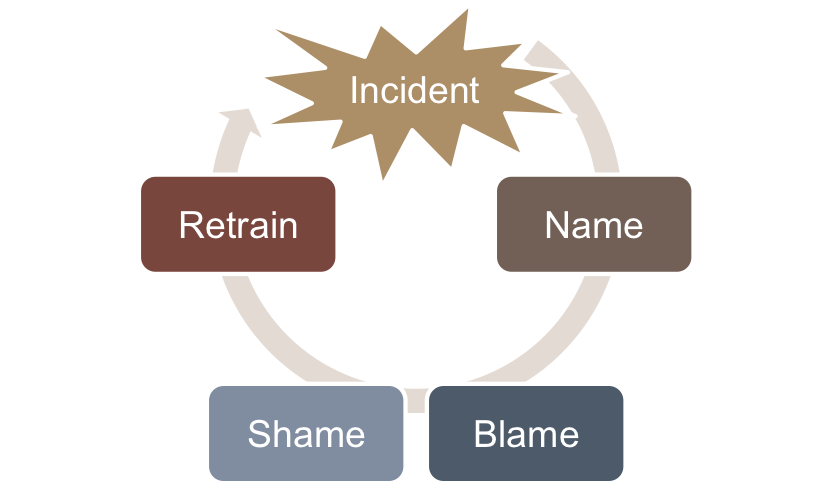 Obviously in this blog we’ve talked a lot about the need to stop playing the blame game after events (here, here, here and here, for example) and usually in those cases we’re referring to the need to stop blaming workers. The good news is that when we have these discussions with managers, safety professionals, and workers most seem to get it – most appear to understand how futile it is to blame workers for events and see the need to start learning from these events by looking deeper into the work system that employees are operating in. Although there are exceptions to this (some people still don’t get it), this trend is great and very encouraging.

However, as the focus is taken off of the individuals at the sharp end of the wedge, there is another disturbing trend developing – blaming the organization or, more specifically, blaming the managers. We saw this in particular in a recent talk we gave where we discussed the famous case of the BP Texas City Refinery Explosion (we wrote a blog about part of the incident here). One of the attendees brought up the point that the incident was caused by human failure, but not on the part of the operators, but on the part of the managers all the way up the corporate ladder.

Although we understand how the attendee came to this conclusion, the problem with this line of thinking is that it is not that different than blaming the workers. If we blame management for an event all we’re really doing is playing the blame higher up the corporate ladder, not really understanding what went wrong.

Think of it this way – one of the reasons we take the emphasis off of human error is because workers aren’t intending to hurt themselves or others and they are trying to do a good job (at least what they perceive to be a good job). Essentially, the actions of the workers made sense to them at the time. They thought that what they did would help them achieve their goals and wouldn’t make anything significantly bad happen. So, rather than blaming them for a mistake, we should try to understand why it made sense for them to do what they did in that moment.

Makes sense, right? So why wouldn’t the same line of thinking apply to those higher up the corporate ladder?

CEOs usually don’t want to be responsible for getting people killed and they usually want to do good for their company and when their workers get hurt or killed that is, almost by definition, bad for their company. CEOs act in a way that they believe will help them achieve their goals and won’t make anything significantly bad happen. So, rather than blaming them, shouldn’t we also try to understand why it made sense for them to do what they did?

Now, we aren’t saying that managers, supervisors, leaders, etc. don’t have more responsibility and more ability to do good and bad. We aren’t even saying that those on the high end of the corporate hierarchy shouldn’t have a bit more to answer for after an event. What we are saying though is that if we really want to make progress in safety we need to understand the conditions that cause humans to do things that contribute to events. Simply saying that these managers, supervisors, and leaders are immoral, evil, greedy, or even using more seemingly sterile terms such was “poor leadership” or “inadequate supervision” are not useful because they presuppose that all we need to do is replace the poor leader and inadequate supervisor and then we’ll be safe. Essentially we’re saying that our system is unsafe because we have unsafe humans and if we only get rid of them everything will be right in the world. This is simply untrue and is profoundly unhelpful.

Instead, just as with workers, we need to try to understand the systems that those high on the corporate ladder work in. We need to get into the messy details of normal work at all levels within the organization and see the world from their perspective. Only then can we be in a place to make effective interventions that facilitate safe and successful performance.